Posted on December 9, 2015 by wednesdaymorningdevotional

Now there were in the same country shepherds living out in the fields, keeping watch over their flock by night. – Luke 2:8 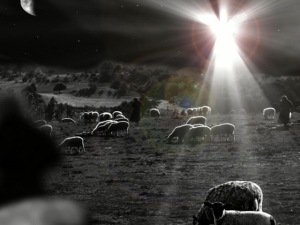 A shepherd in Bible days seemed to be about as low of an occupation as one could have. In 1 Samuel 16, when Samuel went to the house of Jesse to anoint a new king, no person deemed David, the shepherd boy, worthy of consideration. When God rejected all of David’s older brothers, they finally went and got him. Upon his arrival, he was anointed the new King of Israel.

In the Christmas story, we find shepherds simply doing their job. They are keeping watch over their flock. In their minds, there is no way they are going to allow some wild animal to prey on even one of their sheep. As they were simply doing their job, the Angels of Heaven made History’s greatest announcement. This announcement wasn’t made to any of the kings of the Earth, but to these simple shepherds.

In Matthew 22:30, Jesus says that when we are resurrected, we will be “like the angels in Heaven.” I have often fantasized about what that will be like. I mean, forget light sabers, I want to wield a flaming sword like those in Genesis 3:24. I want to fly with two of my six wings as they do in Isaiah 6:2. In 1991, as a teenager just starting out in my walk with Jesus, these seemed mighty appealing.

Today, as a 40-year old adult and 24-year old Christian, I admire these angels for much different reasons. They are completely free from pride and envy. They were just as joyful and content in making their announcements to lowly shepherds with no audience, as they would have been if they had been in Caesar’s Palace with a grand audience. It mattered not to them who they made the announcement to, it only mattered whom they were making the announcement about. A Savior had been born! He is Christ the Lord!

This morning, I believe God is revealing to me that I can be as those angels in Heaven. I don’t have to wait until I draw my last breath to be like them. As a teacher, I can go and teach my students at the alternative school. Maybe I’m not at the nicest school with the highest achieving students, but I can give Glory to God in the Highest! I can teach with all my heart while being joyful and content. My life can proclaim His Great Name! It matters not to whom.

As a pastor, I don’t have to have the nicest building, the wealthiest people, or those who would be considered the “higher-ups” in society. I can be content to shepherd the sheep God has given me and help them overcome this dark world. The angels didn’t need a large audience nor did they need anyone to know whom they were in order to give “Glory to God in the Highest!”

The world has defined greatness and success. As a Christian, I must redefine it.

If you claim to be a Christian, ponder what it would look like to do life today free from pride and envy. For me, I wouldn’t need anybody to tell me how great I am or what a great job I’m doing. I would have absolutely no desire whatsoever of being the best, doing the best, or achieving the highest. I would need only to do my best while being mindful that God is with me. I would desire no man’s praise, nor would I need my name to be known by men. My eyes would not be turned by any promotion, raise, or lottery jackpot.   I would have no desire to climb this world’s ladder of success, for my heart would find no contentment or satisfaction in any position this world offers.

True contentment and satisfaction can only be found in the one whose Name those Angels came to proclaim. He is the only one who brings true life and true peace. He is the greatest gift life has to offer . . .

He is Christ the Lord.